The Risk of Using Programmable NPUs 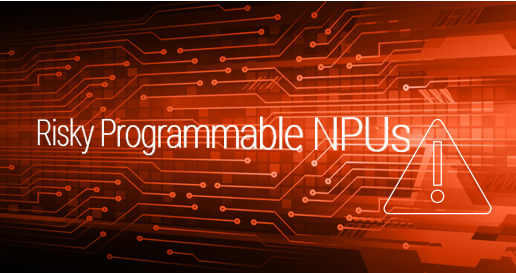 Over the past few years, it seems that one after another, Network Processing Units (NPUs) are being discontinued. Look at the trail of NPUs that are no longer being produced:

The most recent programmable chip to fall by the wayside is the Xpliant NPU that Marvell inherited in its acquisition of Cavium. This raises the question: why have NPUs been so unsuccessful? There are many possible answers to that question, but there are four main points to consider:
1. Performance never lived up to the hype:
As more features were added to the NPU, throughput declined.
2. There is no business case for a programmable ASIC:
NPUs were only realistic for high-end switches and routers, not for smaller devices, and as such, volume is low.  There was never any economy of scale, which also kept prices high.
3. It isn’t futureproof:
Once the technology on a programmable chip becomes outdated and no longer fits the latest protocols or standards, the cost and time of developing a new programmable network on the NPU is prohibitive.
4. It isn’t easily portable:
The code for programmable chips is unique to that specific vendor’s NPU, and there is no practical way to move the code from one chip (that was, perhaps discontinued) to another.

Given these factors, it seems terribly risky to consider an NPU solution, even if it is offered by one of the largest companies in the industry. The chain of discontinued products alone should be enough to scare off most network architects and corporate decision makers.
This becomes even more obvious when the NPU is compared to its alternative – the FPGA:

Simply put, if you are a manager or designer that is creating a product that you want to last, you cannot take the risk of working with a programmable NPU. Instead, choose an FPGA with Ethernity’s complete networking solution, and you will reap the benefits of truly programmable open hardware that provides high performance at a low cost, without fear that it will be discontinued in the near future.