One of the foundations of the 5G architecture is to split the radio access network (RAN) into the Radio Unit (RU), Distributed Unit (DU), and the Centralized Unit (CU), to make network deployments more flexible and scalable. This does away with monolithic end-to-end system vendors and opens the architecture to interoperable best-in-class components.  It also enables software-based Network Virtualized Functions (NFV) to handle the specific tasks of the 5G networking, which adds agility and futureproofs the network.

In this new architecture, data travels from the radio tower to the RU, which sits in the base station and translates the radio frequency into a digital sample that runs over Ethernet  (eCPRI) to be passed toward the rest of the network over fiber optic infrastructure.  The DU, typically in the Central Office at the edge of the network, aggregates the data being sent from the various RUs and begins the process of forwarding the data toward the correct destination.  The data can be sent to any number of CUs, located within the cloud data center, bridging the gap between the DU at the edge and the core network. 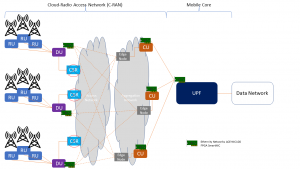 But for the DU to pass the data through to the appropriate CU, it often needs to forward the traffic via multiple networks. This requires that the DU be equipped with routing functionality, ideally included in the DU server itself.

However, when DU functions are implemented using CPU-intensive NFV software, there is no capacity remaining in a typical white box server to include virtual routing functionality. Until now, this left just two options for the network operator:

Ethernity’s Router-on-FPGA-NIC  makes it possible to eliminate the need for a CSR and incorporate a vRouter in the inexpensive white box DU server.  Our ACE-NIC100 can offload third-party vRouter software by using standard DPDK APIs, with complete routing functionality handled by the SmartNIC in the DU server, while control functions remain on the CPU. The only added expense is in swapping out a standard NIC with the ACE-NIC100.

The ACE-NIC100 includes eCPRI ports to aggregate data from the RU. After the DU functions are handled as usual by the software on the white box device, the FPGA SmartNIC also acts as a router, forwarding it on to the correct central unit.

Ethernity also offers the option to use our proprietary vRouter software on the ACE-NIC100. Between that option and the option to offload third-party routing software running over DPDK, the Ethernity 5G DU vRouter solution enables true hardware disaggregation.

In addition, the ACE-NIC100 supports all the Layer 2 functions needed within a DU NIC, such as clock synchronization to accurately insert time stamps recovered from the network as backup to the GPS signal. It also has built-in hardware-based traffic management features, including packet classification, deep buffering with HQoS, and OAM. The Router-on-FPGA-NIC feature then adds router data plane functions like L2/L3 VPN, MPLS, and segment routing.  Moreover, the ACE-NIC100 comes with ENET-D, Ethernity’s integrated DMA, so the server  doesn’t need to rely on an additional Ethernet controller.

It should be noted that Ethernity’s Router-on-FPGA-NIC is not limited to application within the 5G DU, which is but one example. The concept of adding routing via our FPGA SmartNIC can be used to improve many applications, including PON OLTs, broadband network gateways, and many others. Wherever it would be beneficial to provide routing within a server instead of in an external unit, Router-on-FPGA-NIC is the ideal solution.