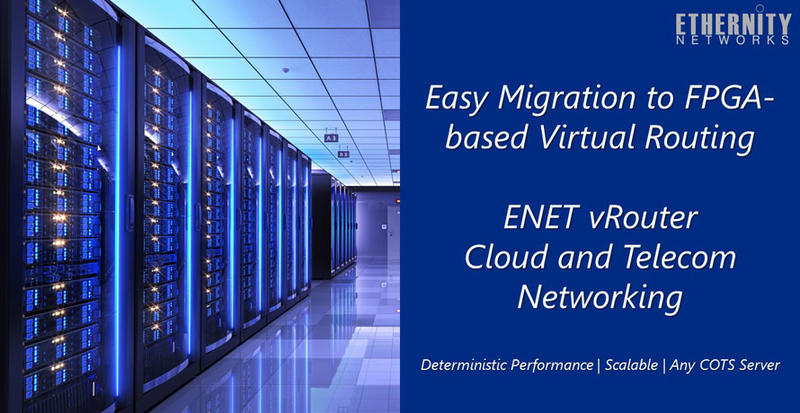 A common challenge for communications and internet service providers, as well as enterprise data centers, is how to accelerate network performance without having to make a large investment in new hardware. There is an understandable temptation to take a software-only approach, in the belief that software will always be less expensive than hardware. That may be true sometimes, but not in every instance. In the case of virtual routers, the advantages of a software solution can be lost due to the fact that such solutions require expensive servers, loaded up with CPUs, to handle the levels of processing needed. This can end up being a costly strategy. Pure software solutions often require servers with at least 24 CPU cores. That increases the upfront costs, as well as the ongoing costs associated with increased power needs. A better approach would be to deploy a FPGA-based virtual routing solution that uses less expensive commercial off-the-shelf (COTS) servers.

Our newly introduced ENET vRouter, which we will be spotlighting at Mobile World Congress later this month, achieves that objective. It allows companies to add 100 Gbps routing functionality by plugging our ACE-NIC100 FPGA SmartNIC networking and security acceleration cards into COTS servers and using our vRouter application on the host CPU. ENET vRouter provides an inexpensive, virtualized network upgrade.

By using a data center’s existing COTS server footprint, the vRouter uses FPGA networking and security acceleration to offer deterministic low-latency performance without significantly affecting power and physical space requirements. Ethernity’s patented technology reduces required logic by up to 80 percent, which allows a user to benefit from more compact and affordable FPGAs that provide the ultimate in networking acceleration.

With FPGA-based data plane acceleration, the networking and security functions can be offloaded from the CPUs, which are more effectively used when appropriated to the control plane. This not only offers enhanced networking performance, but also optimizes CPU utilization.

There are other advantages to this solution:

You can learn more about the ENET vRouter here, and we welcome you to meet with us at Mobile World Congress to see a demonstration.