ENET-D is an add-on firmware technology to the ACE-NIC100 SmartNIC that enables customers to further avoid ASIC-based components and reduce power consumption and valuable silicon real estate.  As an FPGA-based Ethernet adapter and DMA (direct memory access) engine, ENET-D eliminates the need for proprietary hardware serving as the Ethernet controller on a network interface card. This allows complete disaggregation of the Ethernet controller on the FPGA SmartNIC.

This disaggregation adds flexibility to the network and saves operators significantly on operating expenses such as power consumption and physical space on the NIC. Moreover, because ENET-D is implemented on fully programmable FPGA hardware, it eliminates the need to replace monolithic ASIC-based hardware with upgrades or new devices that include a broader feature set. Replacing field-deployed hardware to support new functionality can cost up to five times the initial cost of the hardware itself.

When ENET-D is combined with Ethernity’s ENET Flow Processor and run on Ethernity’s cost-optimized and affordable ACE-NIC100, it delivers a complete Router-on-NIC with integrated Ethernet controller. ENET-D can fit into different FPGAs and scales the number of queues, physical functions and virtual functions that can be handled by the NIC. It is capable of connecting to multiple virtual machines, containers, or virtual networking functions. ENET-D also provides both Linux kernel drivers and DPDK drivers. 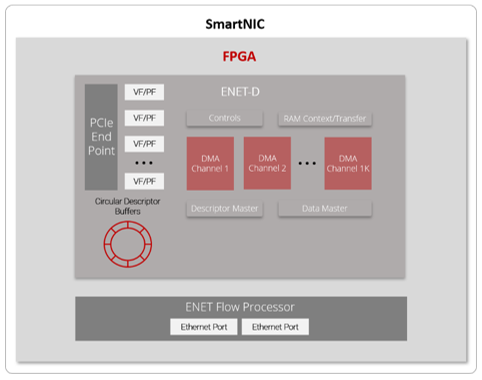 ENET-D supports NFV and 5G customers who demand further disaggregation of their networks. This is an important step toward Ethernity’s vision: that users can purchase an x86 server with a bare-metal FPGA-based NIC, then select the best FPGA firmware for intelligent NIC functionality, in the same way they can currently run any Linux package on a bare-metal server. This will entirely eliminate ASIC vendor lock-in for the emerging edge compute market.

By using Ethernity’s patented technology that reduces the amount of logic used on the FPGA, the ENET-D Ethernet controller firmware consumes much less space on the chip than its competitors. This enables it to fit into a small FPGA and to consume 2-3 times less power than similar Ethernet controllers on the market.

Ultimately, this is yet another positive development in the advancement of network disaggregation, ensuring that users can achieve top-tier performance with maximum flexibility and choice of vendors while futureproofing their networks.