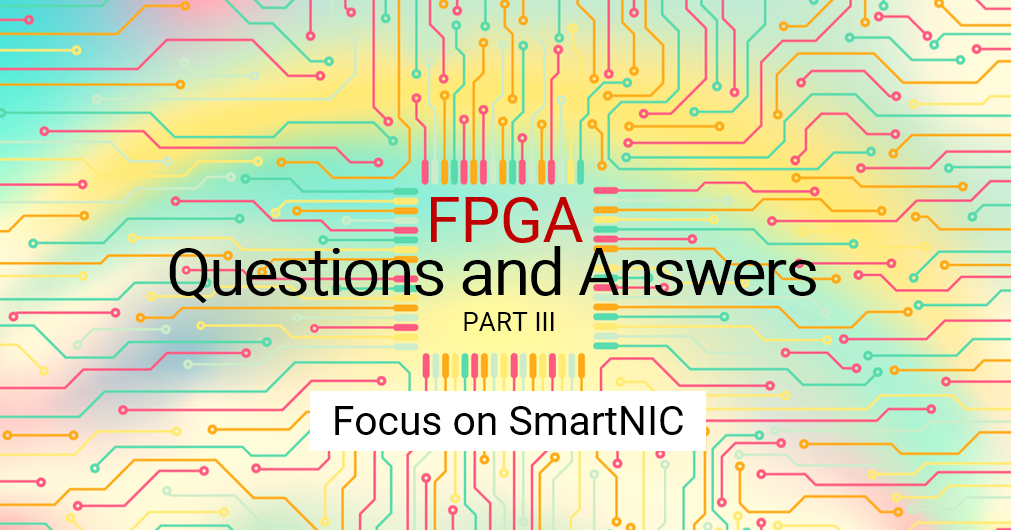 Today we wrap up our review of the questions that we are frequently asked about FPGAs in industry conversations, as more and more telecom vendors are moving toward NFVI and FPGA SmartNICs.

How do FPGAs make it possible for users to burn fewer CPU cores, and why is that an important advantage?

Some networking functions are handled more efficiently by hardware. Encryption and decryption, for example, are tasks that are server CPU-intensive. When you offload CPU-intensive tasks to FPGAs, you save a lot of CPU cycles. The FPGA-based SmartNIC implements these functions efficiently, so you end up saving both server CPU cores and power.

When it comes to SmartNICs, why do you believe that FPGA-based cards will emerge as the de facto standard?

First, this is being defined by the market leaders. China Mobile just made a request for a spec for an FPGA-based SmartNIC, and we know that Microsoft Azure has determined that FPGA-based SmartNICs are the way to go. Additionally, we have seen the de-emphasis, and in some cases, discontinuation of other types of SmartNICs. NPU-based SmartNICs are dying out, and even some multicore SmartNICs have less of a presence than they used to, such as Cavium once it was acquired by Marvell.

The biggest factor in FPGA’s superiority is that it scales to higher bandwidths, whereas multicore SmartNICs cannot. When you go beyond 40Gbps, the number of required cores is simply not tenable considering the power and expense involved.
Another factor is “elephant flows”. When a single flow reaches 20 or 30Gb, no single core can handle it, and making CPUs faster is not easy. FPGAs are the right solution to address both of these factors.

What did Microsoft have to say relative to the use of FPGAs in Azure, and why is that significant?

Microsoft’s experience in reducing the networking load for CPUs through the use of FPGA-based SmartNICs was a major proof point in demonstrating the great value of FPGAs in networking. In its Accelerated Networking white paper, Microsoft declared that FPGAs demonstrate the “… performance characteristics of an ASIC, but the programmability and reconfigurability inherent in a software solution like a SoC.” The company also stated that after implementing FPGA SmartNICs, their host cores demonstrated less than a one percent utilization rate.

One other point that Microsoft made was that the programming of FPGAs is a complex undertaking, and the company recommended that companies not to do it on their own, but rather to use experts with strong experience in writing FPGA code for networking. This is an area in which Ethernity shines.

Do you have comparison data to demonstrate whether FPGA-based SmartNICs outperform other options?

Yes, we do. We compared virtual Broadband Network Gateway (vBNG) performance and cost in a side-to-side test between a server-only approach and FPGA SmartNIC acceleration. In every test, SmartNICs demonstrated superior efficiency. Core utilization, for example, never exceeded 8 percent even at 200 Gbps total throughput. In power consumption, SmartNIC usage was one-tenth that of a server-only approach at 200 Gpbs, and never exceeded 26 percent at any data rate. And in a cost comparison, the SmartNIC approach cost a fraction of the server-only method at all data rates. More information on this comparison is available in our white paper, Enabling the Virtualized Edge with SmartNIC Acceleration.

How do FPGAs fit into the CORD (Central Office Re-architected as a Datacenter) initiative or other industry initiatives?

CORD has defined several platforms that mostly rely on Open Compute Project (OCP) hardware, including one that is an XGS-PON box. Phase One of that platform used an OCP card, Phase Two used an OCP box, and now AT&T has driven Phase Three to use an FPGA-based OCP box. So, in this specific segment, they have moved from an ASIC to an FPGA-based multi-access box.

Similarly, other initiatives are also turning to FPGAs over time to provide the efficiencies required to enable edge computing and 5G.

What is the main opportunity for FPGA to be influential in telecom?

SmartNICs are the top opportunity. The telecom vertical is moving more and more toward NFV and away from specifically designed hardware boxes, the trend toward SmartNICs becomes more important because there is more room for FPGAs in SmartNICs than in the boxes they are phasing out. So we are seeing more telecom vendors moving toward FPGA SmartNICs.

Another area is that there remain some specific boxes that need FPGAs in them. White boxes, for example, are being used at the Carrier edge or even at the customer premises, and they can be accelerated by FPGAs, perhaps not in the form factor of a NIC, but rather in a SoC integrated into the box.

Generally, we are seeing a lot of requirements for FPGAs for 5G because of low latency and accelerated networking. Even more so, because the 5G specs are still in flux, FPGAs provide the programmability to allow changes in field-deployed hardware even after the specifications change, future-proofing the operator networks.

That wraps up our series of questions about FPGAs. But again, we welcome additional queries because we know that these questions reflect a growing awareness of the many advantages that this technology brings to networking and data processing. If you’d like to ask these questions in person, we will be at Mobile World Congress Shanghai in Hall N1, Booth E168. Please make an appointment with us to consult with our experts.